Formed in November, 2016, Whole Washington is a grassroots coalition of healthcare professionals and volunteers from all over Washington State. We organize and support efforts of transformation, not incrementalism, and we fight at both the national and state level. The ultimate goal is a national, single payer system. We endorse, organize for, and champion Medicare for All. We use all avenues available including bills through the legislature and the direct tool of democracy: the initiative process.

Whole Washington is fighting for federal and state-based universal, single-payer healthcare. We can't watch our friends, family, and neighbors suffer and die because they don’t have the healthcare they need. We demand a publicly-funded healthcare system that puts people over profits. 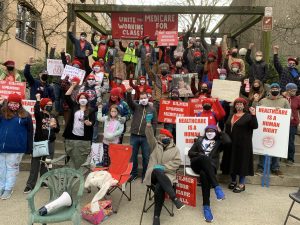 We support legislation that is publicly funded, includes everything, and covers everyone

Instead of multiple private insurance companies and multiple programs, a public trust will cover our healthcare expenses. We’ll eliminate the bureaucracy of the private health insurance and save money while improving health outcomes. All services requiring a medical professional are included with no financial barriers –no copays, fees or deductibles. Dental, vision, reproductive care, mental health services, and more are fully covered. Our healthcare will not be tied to employment, age, marital status, immigration status, incarceration status, or pre-existing condition. Everyone is covered. No one is left out.