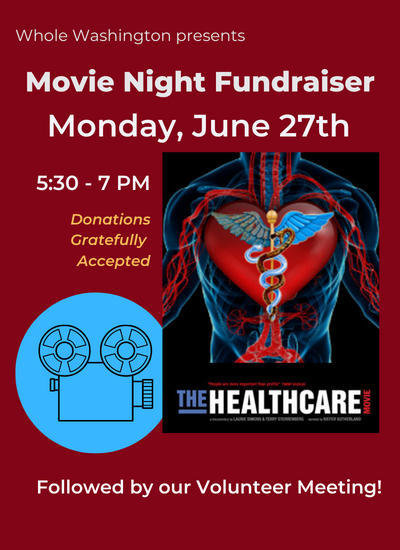 Join us for Dinner & a Movie featuring

BYOD (Bring Your Own Dinner) and we’ll watch this vital documentary together.

Register for the Movie Here

This is a Whole Washington fundraiser so please pitch in what you can to keep the campaign churning toward our goal of 400,000 signatures. Following the movie is our Monday Night Volunteer Meeting at 7 PM!

Narrated by Kiefer Sutherland, this documentary provides the real story of how the health care systems in Canada and the United States evolved to be so completely different, when at one point they were essentially the same. Most people under the age of 50, in both countries, are not aware of the intensity of the political struggle that led to the universal medical care system in Canada. Nor are they aware of the public relations campaigns, still active today, that have been prevalent in the United States since the early 1900’s to dissuade the public from supporting national health care.

Produced by Canadian/American couple Laurie Simons and Terry Sterrenberg, The Healthcare Movie reveals the personal and emotional impact on Canadians who now have access to universal health care because of the heroism of people who took a stand nearly 50 years ago. It also reveals the continuing struggle in the United States between the fear of government intervention and the right to quality health care for all people.

Every day people are dying or going bankrupt due to the ills of the United States system. Who are we in the face of this human tragedy? If you agree that people are more important than profits, then you must watch this film.