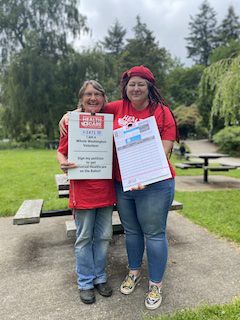 Whole Washington members are asking for help in gathering 400,000 signatures by Dec. 30 to advocate for Initiative 1471.

Volunteers Pam Ketzner, a retired nurse, and Laura Fielding, a holistic healthcare practitioner, were at Wright Park on Wednesday, June 22, collecting signatures for Whole Washington’s Initiative 1471. The initiative pushes for a publicly funded universal healthcare system for all citizens regardless of marital status, housing situation, employment status, and any other current limitations. It would cover all medical services, including mental and dental healthcare.

Whole Washington is an organization run by a coalition of healthcare professionals and volunteers from all over Washington. Georgia Davenport, a founding member of Whole Washington, and other volunteers posed the question of what if we did an initiative for universal healthcare? That’s when the petition was born. Initiative 1471 was filed in March this year, and signature gathering began in April. The petition requires 405,000 signatures by the end of the year in order to move forward.

If it moves forward, people might question how it might be funded. Many of the costs Washington is paying would be reduced with universal healthcare, according to Fielding.

“When people say, ‘How are we going to pay for this?’ the answer is we are already paying. We’re paying enormous amounts on administrative costs,” she said.

Giving people the right resources is essential to promote proper health. The cost of healthcare in America not only prevents people from accessing medical help, but it also causes homelessness. Fielding explains how one of the top causes of homelessness is medical bankruptcy. It’s been seen a lot during the pandemic.

“People can’t afford to wait, literally, especially through a pandemic with people dying, and we would’ve had significantly less [deaths] had we had a single payer system,” says Fielding.

Washington is home to over 7 million people, and 6.6 percent of the population have no health insurance, and double that amount are underinsured.

As long as you are a registered voter in Washington, you are able to sign the petition to help Whole Washington reach their goal. Fielding and Ketzner ask those with questions to visit the website (wholewashington.org) which contains all information people may need, and many frequently asked questions as well.

Whole Washington members are at large events all over Washington, including all farmers markets and many other events. There will be members collecting signatures at the upcoming Tacoma Pride Festival on July 9. They will also be at the Mosaic Tacoma Arts and Culture Festival on July 23-24 from noon to 7 p.m. You can find other events they will be at on their website.

For those who want to get involved beyond just signing the petition, you can volunteer to help gather signatures, and businesses can have signature sheets as well. More information on how to contact Whole Washington is also on their website.

Ketzner served Tacoma as a nurse for 40 years and is now retired. She became involved with Whole Washington as a volunteer to help fight for universal healthcare. Her former coworker encouraged Ketzner to join as they would wonder about the diverse coverage in healthcare.

“I want to see things for the future for anybody on Medicare. It certainly is a wonderful program, and you can buy advantage programs, but it still costs you money to do that,” says Ketzner.

Fielding, a veteran who served for more than seven years overseas in the United Kingdom, explains how being in the United Kingdom where healthcare is guaranteed opened her eyes to the issue here in the United States. She was inspired by the pink hats worn at the Women’s March and began knitting red berets for her cause. Kathryn Lewandowsky, vice chair of Whole Washington, noticed Fielding’s red berets and reached out. This is when she became part of Whole Washington and is now knitting and crocheting for this initiative.

Fielding and Ketzner want to express their deep gratitude for Georgia Davenport and Andre Stackhouse for their work for Whole Washington and helping everything come together. Stackhouse has helped organize many events for the cause, including the March for Medicare for All last summer.

Article from the Tacoma Weekly